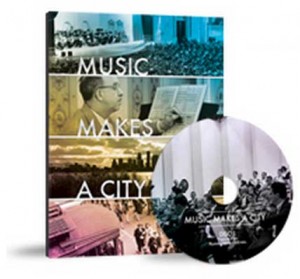 Winner of 2012 Gramophone Award for Best DVD Documentary
The full feature-length (100 min.) version of
Music Makes a City on DVD is available for purchase through:

Includes:
Disc 1 with 100 minute feature-length version and Disc 2 Special Features with over 2 hours of interviews with composers, musicians, and related personalities.

Can a symphony orchestra help save a city? In the late 1940s, an orchestra in Louisville, Kentucky was about to go out of business. At that point, a new mayor stepped into office whose views about civic vitality were founded on the ideas of the Chinese sage Confucius. His vision of prosperity was focused on making the arts available to every citizen of the city. Music Makes a City tells the rousing, inspiring, nearly unbelievable story of an American city and an orchestra that would not only transform Louisville—it would also make a lasting contribution to music unmatched by any orchestra in the world.

The Louisville Orchestra performed and recorded new works on First Edition, their pioneering record label. Under the direction of Robert Whitney and his successors, principally Jorge Mester, the orchestra recorded hundreds of commissions and world premieres. No other orchestra can match this contribution to contemporary musical culture.

The price is the same for individuals and institutions: $34.95 through shoppbs.org.

Especially relevant in these areas of study:

Praise for Music Makes a City:

“In striking synchronicity, a mayor, a conductor, and a robust postwar generation of composers intersected to make the city a hub for visionary composition…. Viewers will find themselves agreeably challenged. And stirred. The personalities are as noteworthy as the soundtrack.”
— Andy Webster, New York Times

“The film brings fascinating insights into the cultural life of an American city and perhaps the most important lesson to take away from it is that through sheer conviction Whitney was able to carry his audience with him.”
— Alex Ross, The Rest is Noise

“Music Makes a City reminds us that the arts are an absolutely essential ingredient to the vitality of our communities.”
— Alan Gilbert, Music Director, New York Philharmonic