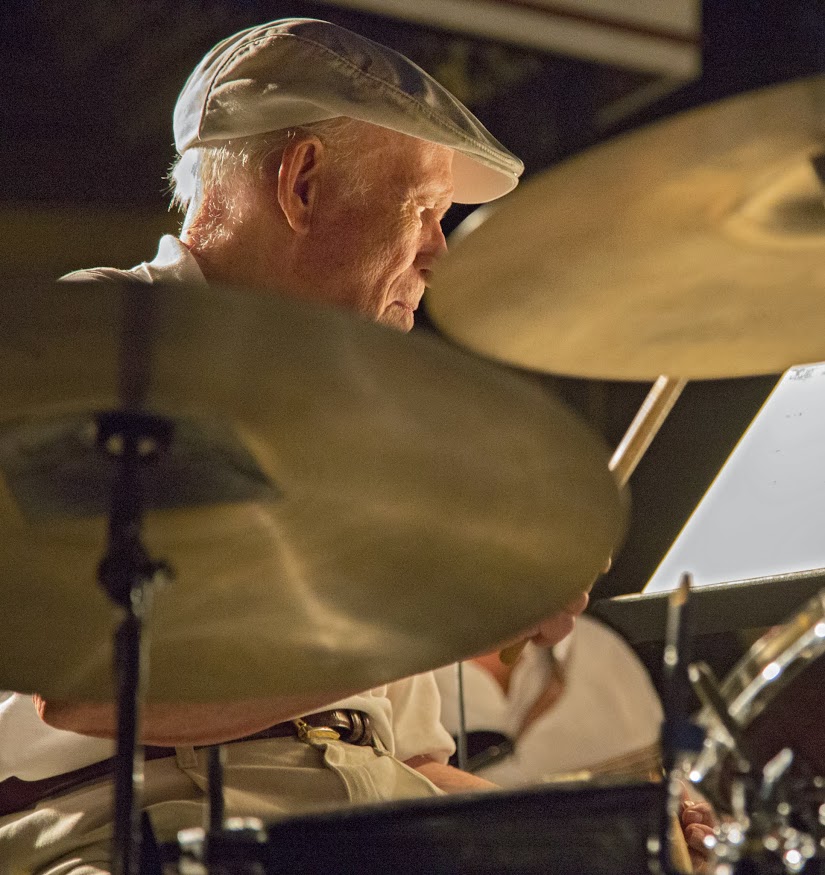 Louisville drummer John Roy has played drums for over 70 years, and has performed with Liberace, Bob Hope, Eartha Kit, Glenn Miller, Roy Rogers, Dick Van Dyke, and other famous artists in his long and storied career. He continues to play drums with his wife June Kelley-Roy in their 14 pc. big band The Ovation Orchestra as well as local and private venues with a Jazz Trio. He was interviewed by Music Makes a City for this guest blog post. Photograph by Ken Beilman.

It was 1950 and I was a young drummer, 21 years old. I had subbed a couple of times for the orchestra already and they needed a third percussionist for the performance at Carnegie Hall. I got the call. At the time I was trying to make a living in the music business and playing everywhere I could, supper clubs, the rodeo, the fairs, so I played with the Louisville Orchestra while I was doing all that. It was a wonderful time, the fall of 1950. The new music they were doing was a real adventure, I thought some was really good and some, well, I was not so sure. I loved the Schuman, it was very memorable, very emotional, wonderful, what I would call “solid stuff.”

I had first met Ted Otten, the Louisville orchestra percussionist, when I was at Manual high school in Louisville. The band director had him come in to work with us on a few areas. I guess he noticed me because I was a hard worker in high school. I already knew I wanted to be a musician and was working hard on my music reading and playing. So after that I subbed a couple of times with the orchestra while I was a senior in high school.

While we were rehearsing in Louisville I got my draft notice. Robert Whitney asked me to meet him down at the draft board and I sat outside while he talked with them. I believe he asked them to delay for the Carnegie show. He told them that what we were doing with this performance would be important for Louisville. Apparently he convinced them, because I got to do the show. After the Carnegie show I went into the army.

The orchestra was really good, very wonderful players. I remember we rehearsed with Martha Graham once in New York, and it went well. That was the only performance she did that year in New York, I believe. There were three of us percussionists playing. I mostly did the snare drum and the cymbals. The tympanist was Ted Otten, he was a really excellent, well rounded percussionist. (He taught at the University of Louisville. ) We were small, only 52 players, not like the big orchestras in New York, so I remember we felt really small on the stage. It was fun. I would say it was a privilege to be there.